A new GamesBeat event is around the corner! Learn more about what comes next.

Kalam Labs has raised a preseed round of $450,000 in funding for its livestreaming platform for educational games.

The platform from Kalam Labs is aimed at streaming educational games for children from kindergarten through high school. The team’s young founders — who are still in college — hope to benefit from the “merging” of games an education. They’re encouraged by the popularity of Minecraft and Roblox, which together have hundreds of millions of monthly active users.

The money comes from Lightspeed and Y Combinator, and the company is going through the Y Combinator accelerator. Kalam Labs wants to build a “metaverse for science,” starting with fun virtual content for those 6-14 so they can learn science, technology, engineering, and math (STEM).

During the livestreams, an instructor plays a multiplayer game with the kids, taking them through game-based exercises about the asteroid belts, Mars landings, and other topics. They interact with the kids on live video and interactive live chat.

Three top investment pros open up about what it takes to get your video game funded. 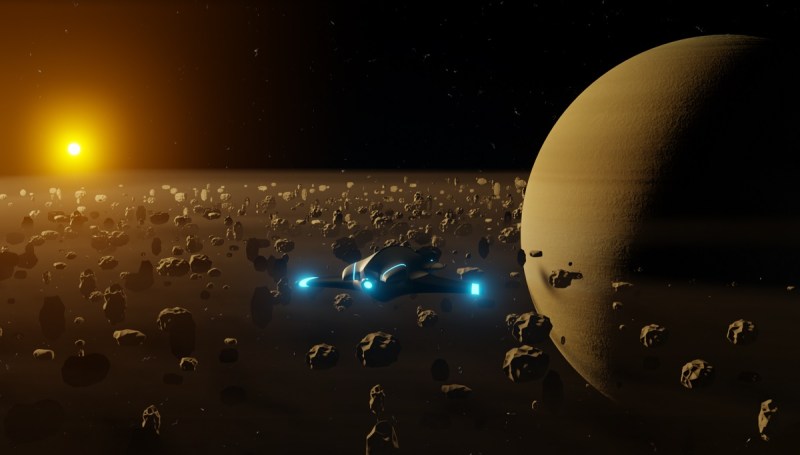 Above: Kalam Labs is teaching kinds about astronomy.

“That is how kids are learning nowadays. It’s really fun,” Faraaz said.

Kalam Labs, based in both Bangalore and San Francisco, launched its platform in beta in June, and the company said it already has 10,600 subscribers on YouTube and more than 1,400 paying subscribers who are generating more than $15,000 a month in revenue. The subscriber base is growing at more than 50% per week without paid advertising, it claims. The subscription costs about $25 for a three-month period.

“​Kalam Labs is offering a radically different method of learning science,” said Hemant Mohapatra, a partner at Lightspeed India, in an email to GamesBeat. “Education is undergoing a generational change, and this team plans to be at the forefront of building products that will accelerate this shift. We are honored and excited to back this young, insightful, and resourceful team as they build the metaverse for education for kids all over the world.” 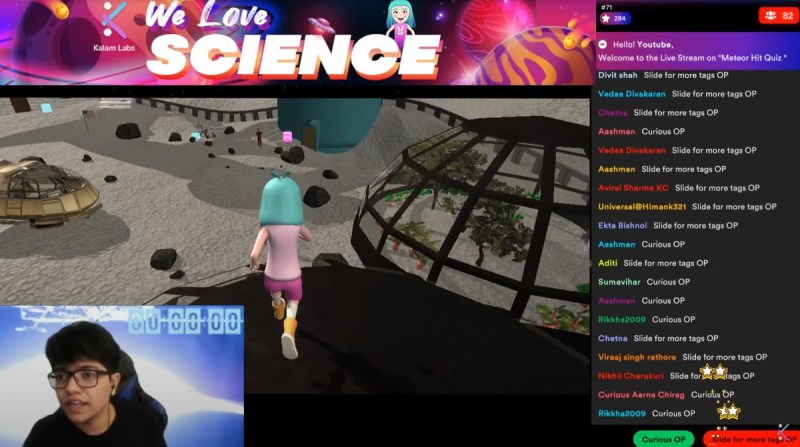 The founders are all 21 years old: Ahmad Faraaz, Sashakt Tripathi, and Harshit Awasthi. They’ve been working together for about two years, and they launched the platform around six weeks ago.

“We are 21-year-old founders, and we have passion,” Faraaz said in an interview with GamesBeat. “We saw that the media that we are using to teach kids are like blackboards, textbooks, and Zoom classes. They are terribly outdated games right now compared with Roblox, Minecraft, and others. We thought we could do a curriculum-based system with top science topics.”

The company broadcasts a show each day at 6 p.m. Students are spending about three hours a week in the sessions and coming back a few times a week for 40 minutes at a time to learn about new science topics, the company said. The focus for now is astronomy, and that will expand over time.

“We are getting the kids to come to us as a weekly habit,” Awasthi said in an interview.

Kalam Labs’ platform has both live video and chat interaction. A typical Kalam Labs session features a live instructor taking a group of students through a virtual world while explaining STEM topics via game-based exercises and providing right nudges along the way.

Faraaz said that kids who are born in the age of iPhones, Netflix, and Google have a harder time sitting through a class, sitting in front of a blackboard. He believes they want to creative learning experiences that teach them at a fast pace. And that’s the feedback they’ve received so far from the livestreams. The team has about 15 people now.

Other competitors in India include Byju’s and Stay Curious. Kalam Labs hopes to move faster into game streaming and multiplayer gaming to differentiate themselves.

“What is most exciting is that we are at the top of a trend which is happening globally, like games and tech are just coming in together,” he said. “Roblox education and Minecraft education have launched. The biggest companies are already moving in this direction.”

GamesBeat’s creed when covering the game industry is “where passion meets business.” What does this mean? We want to tell you how the news matters to you — not just as a decision-maker at a game studio, but also as a fan of games. Whether you read our articles, listen to our podcasts, or watch our videos, GamesBeat will help you learn about the industry and enjoy engaging with it.

How will you do that? Membership includes access to: