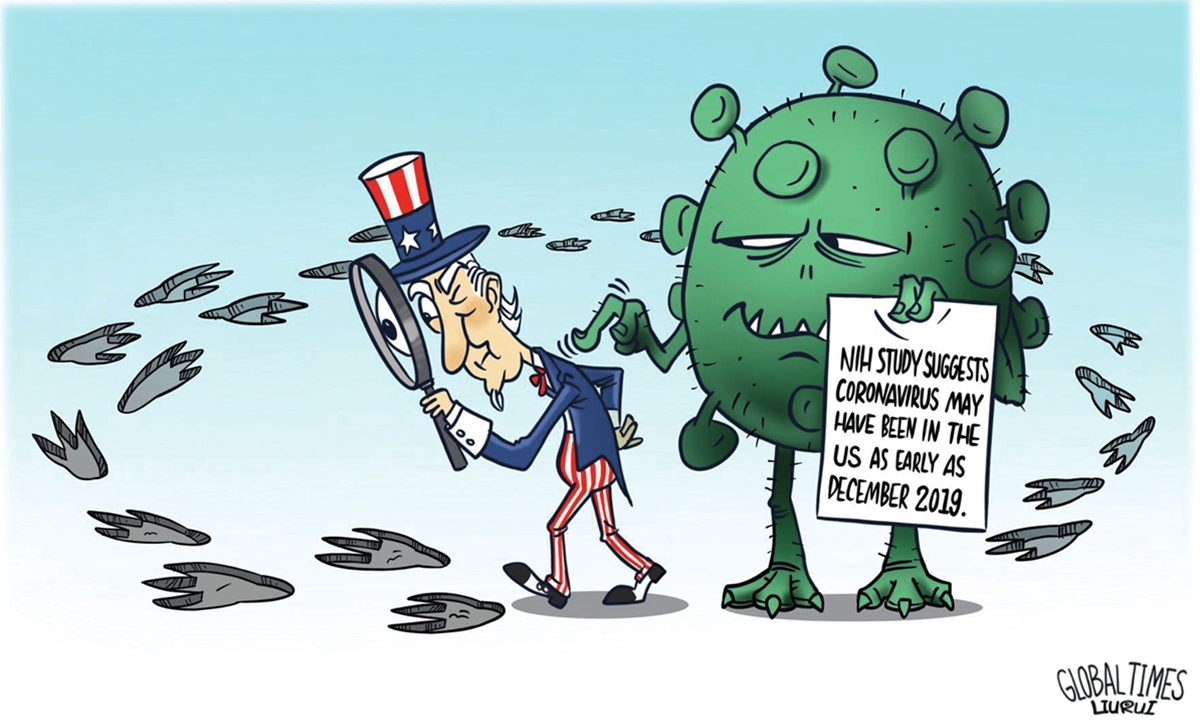 Ninety days have passed since US President Joe Biden ordered for a report probing into the origins of the still ravaging novel coronavirus. On Tuesday, Biden reportedly received a classified report from the US intelligence community that was inconclusive about the origins of the novel coronavirus. It included information about whether or not the virus jumped from an animal to a human, or escaped from a lab in Wuhan. What are the US’ intentions behind its origins-tracing maneuver? Global Times (GT) reporter Wang Wenwen talked to Yasir Habib Khan (Khan), founder and president of the Institute of International Relations and Media Research in Pakistan, on these issues.

GT:  What do you think are the US’ intentions behind its origins-tracing maneuver? Why could a scientific investigation become so politicized?

Khan: Every intension has its deep-rooted history that gives foundation to spillover action. The reason behind the US’ intention to manipulate origin-tracing efforts is never framed on the basis of logic and rationality. Instead, it originates out of fears of losing global dominance. Though China is not the claimant of superpower but the US is under threat that if China continues to spell its economic miracles with peace diplomacy, rule-based international law, equal-footed relations without any prejudice, America’s lopsided world order will lose its steam soon.

Haunted by qualm, White House administration has come out with full-blown “malice and malign campaign” to demonize Beijing administration. It is already naked secret that even before the COVID-19 breakouts, former Trump regime had triggered trade war against China.

To my opinion, origins tracing is just a tip of iceberg. Roots of the US’ anti-China feud are found since inception of the People’s Republic of China in 1949.

Having leveled unfound allegations against China for stealing US intellectual property rights, the US Trade Representative prepared a report in 2017 which tried to establish that Chinese theft of American intellectual property cost between $225 billion and $600 billion annually. Former president Trump, in August 2018, signed the National Defense Authorization Act for Fiscal Year 2019 and banned Huawei and ZTE equipment from being used by the US federal government, citing security concerns. In 2019, the US Treasury designated China as a currency manipulator. In an attempt to subvert China’s counter-terrorism and de-radicalizing efforts, US’ bill “The Uyghur Human Rights Policy Act of 2020” was signed by Trump into law on June 17, 2020. Afflicting China’s internal affairs, The Hong Kong Autonomy Act was passed by the US Congress. The US imposed sanctions and visa restrictions against several Chinese government officials on false allegations of a genocide against the Uygur population in Xinjiang and human rights abuses in Hong Kong and Tibet. The US also launched “The China Initiative” that also involved an aggressive outreach campaign, with federal prosecutors and FBI agents regularly meeting with academia and the private sector about the threat of Chinese espionage.

GT: Do you think it is reliable for the US intelligence agency, which is incapable of judging the situation in Afghanistan, to make the report on the origins of the virus?

Khan: Technically speaking, if we look into professional acumen and integrity, the US intelligence agency stands exposed. Over the last many decades, on home ground to international spheres ranging from Iraq’s weapons of mass destruction, Arab Spring, Syrian crisis and recently Afghanistan mayhem, US national intelligence agencies have been losing steam for inept calculations and flawed assessment reports. Given the disrepute, their report on origin-tracing of COVID-19 is another fiasco.

US public’s own faith on professionalism of CIA and FBI went into tailspin when a special 11-member investigative body traced abuses of power by the nation’s intelligence agencies in 1975.

The worst episodes of unbalanced judgments by the US intelligence agencies came to fore when the US-led invasion destroyed Iraq in 2003 on the wrong plea of weapons of mass destruction. In October of 2002, nine months before the US-led invasion of Iraq, the CIA produced a document summarizing relevant intelligence on Saddam Hussein’s chemical and biological weapons programs. On March 31, 2005, the Commission on the Intelligence Capabilities of the United States Regarding Weapons of Mass Destruction reported that the intelligence community was “dead wrong” in its assessments of Iraq’s weapons of mass destruction capabilities before the US invasion.

A new book by former CIA deputy director Michael Morell spilled the beans that not only did the intelligence community fail to predict the advent of the series of popular uprisings starting in 2011 known as the “Arab Spring,” but also deemed that the movement would “take a heavy toll on Al Qaeda by undermining the group’s narrative.” The Arab Spring intelligence failure led by the US is an eye-opener when touching upon other issues requiring objective assessments, such as Iran’s intentions regarding nuclear weapons, Russia’s next moves in Eastern Europe or China’s expansion. It encapsulates how policymakers can be in a position to command virtually unlimited information and yet know so very little.

Failure of the US intelligence system has many other glaring examples. One of them is poor assessment on the rise of the Islamic State (IS), an offshoot of Al Qaeda in Iraq, which sprang to life during the US occupation in Iraq. The US garrisoned and occupied for eight years, in which it had assumedly developed countless sources of information and recruited agents of all sorts. And yet, by all accounts, when IS’ militants suddenly swept across northern Iraq, the CIA in particular found itself high and dry.

So much so, on the basis of comprehensive information compiled by US intelligence community, the Biden administration had complacent that Afghan forces were capable to defend their territories and even it could take at least three weeks to reach Kabul by Taliban. All assessment proved wrong.

Given the detailed evidences substantiating US intelligence judgments rife with errors and omission, if produced a report on origins tracing will suffer validity and public trust.

GT: Mainstream media in the US have largely reported the report of US intelligence is going to reveal more about the virus’ origins. But when a scientist pushed back the idea that the virus was leaked from the Wuhan lab, few US mainstream media reported that. Why is the case? What is the role of the US media in pushing the origins tracing probe?

Khan: It is irony that leaving aside some, US media freedom and integrity are compromised to greater extent. On the issue of virus origin-traceability, US media is polarized. Some feel dictated by authorities at helm of affairs. Some are funded. Many toe the line propagated by the US government in order to show their solidarity with national narrative. Among them there are media outlets that do not practice impartiality and objectivity. Broadly speaking, the reputation of the news media is under siege. According to the General Social Survey, the number of Americans with some or a great deal of trust in the press has dropped 30 percentage points since the late 1970s. Even Trump used to call mainstream media as “fake media.”

If looked into behavior of US media to see how it report, it is evident what is being published and aired on origins tracing investigation is not the result of unbiased evidences but ulterior motives.

However I am still optimistic that there might be some US media that will uphold the supremacy of truthfulness. Recently media also published a study on the issue. A new antibody testing study examining samples originally collected through the National Institutes of Health’s All of Us Research Program found evidence of SARS-CoV-2 infections in five states earlier than had initially been reported. These findings were published in the journal Clinical Infectious Diseases. The results expand on findings from a Centers for Disease Control and Prevention study that suggested SARS-CoV-2, the virus that causes COVID-19, was present in the US as far back as December 2019. This report is one of evidences to debunk Wuhan lab leak theory.

GT: From your perspective, what impact will the report have on China and China-US relations?

Khan: As far as the report’s impact on China, it is obvious that so far investigation is completed to fathom origin-traceability, China has come clean. First, the joint WHO-China investigation did not drop a hint about China’s laxity or criminal oblivion in Wuhan lab leak propaganda. World knows very well that The COVID-19 virus was first publicly reported in December 2019 in Wuhan, China, but that does not necessarily mean China must be the origin of the virus. As we know, the first patient of the acquired immunodeficiency syndrome (AIDS) epidemic was identified in the US in 1981, but scientists later traced the origin of human immunodeficiency virus (HIV) back to chimpanzees and simian immunodeficiency virus in Africa. On February 9 this year, the joint WHO-China investigation team held a press conference to present the preliminary findings from its four-week field trip study. The 319-page joint research report supported the natural outbreak theory and clearly stressed it was “extremely unlikely” that the COVID-19 virus was leaked from a Chinese lab.

Undoubtedly, report that seems to be declaring China’s hand in lab leak theory will add fuel to fire flaring up China-US brawl. It will make situation highly tense as Biden administration has decided to restrain China at all costs.

On the pretext of origin-tracing report destined to accuse China, President Biden has started disengaging US from various countries to shift complete focus on China. US’ drawdown from Afghanistan despite massive criticism had to digest to get recharged for preparation of final battle against China. Meanwhile the US is ending its combat mission in Iraq by the end of year. At a defense industry event, Vice Chairman of the Joint Chiefs of Staff Gen. John Hyten said the drawdown in Iraq is necessary to ensure the military is prepared for a fight with China, if that day comes. However, there is also an opinion that conflict will not be as tense as witnessed in Trump era. Contrary to Trump, Biden desires to use anti-China outrage for political mileage.